Take a kayak meditation
By Nancy B. Loughlin
Posted in News Press on September 24, 2013.  Posted with permission. 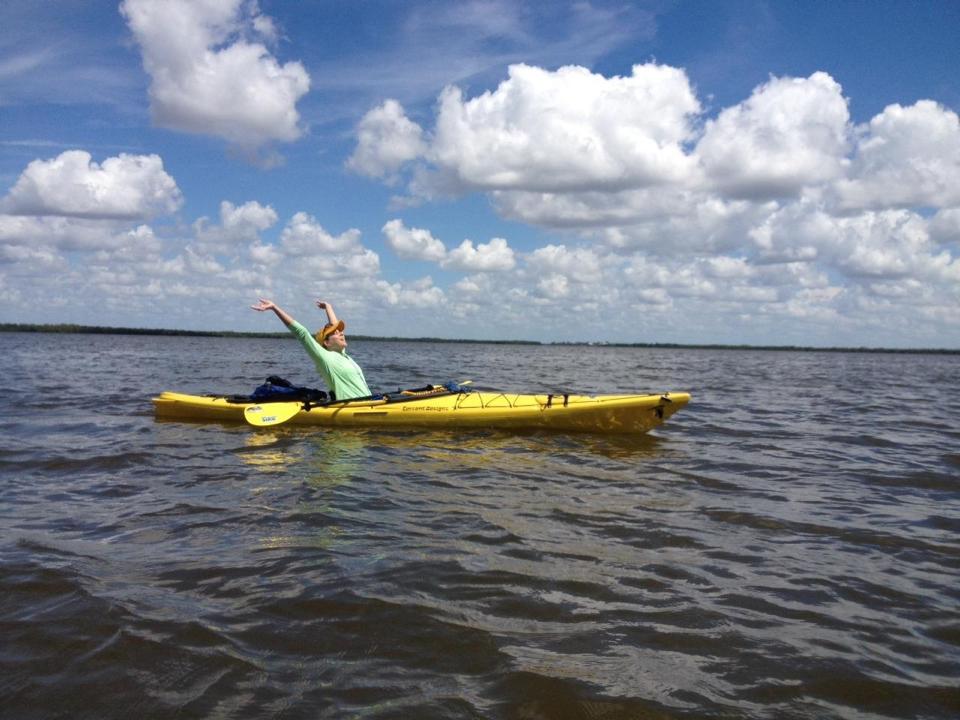 Glide in a kayak guided by Peg Egan, College of Life Foundation master naturalist, and you’ll get it.

The kayak offers a different water meditation than swimming because the kayak explores the boundaries. The water is giving, molding itself to the watercraft’s shape. The push and pull of the paddle is rhythmic; the kayak seat, staff pose, strengthens core and heart awareness, the body energy centers that meld the physical and the energetic.

“Going with the flow, I relax and adjust my inner stride to the water’s movement. My heart rate, breathing and mental focus match the current. This natural wonder is my higher power,” Egan said.

“As the primary building block of life, water has the power to destroy as well as create. While kayaking, I am both at the mercy of the water and allied with its force,” she said.

Meditation One: The human body is between 50% and 75% water, depending on age, and we can’t last much longer than three days without it. According to the documentary Tapped, two-thirds of the world will lack access to clean drinking water by 2030. No water. No life.

The kayak is inherently yogic. It grasps lightly. Every river has a source and crosses many landscapes. The tides inevitably shift; we spin in whirlpools. We ride rapids or hibernate in eddies. It should be no surprise that water rituals are central to myriad faith systems, from baptism to ritual purifications to sweat lodges. Anodea Judith wrote that we are all water, “the essence of all form.”

Meditation Two: Water is timeless. The water on Earth today is the same water from when the planet formed. The same drops of water that cascade from our shower heads are the same water molecules consumed by dinosaurs.

When Egan and fellow guide Brandy Minchew lead historical kayaking tours, the walls of mangroves and palms create a time warp where the Calusa Indians battle Juan Ponce de Leon, the Koreshans fish for mullet and the Megalodon haunts the depths.

Once inside the bamboo-lined Estero River, kayakers are paddling through a living museum. Egan and Minchew take people to the places in history books. The Calusa civilization has been extinct since the 1700s, but their shell mounds remain in Estero Bay, one of nature’s most productive ecosystems.

“Our greatest grappling is with water,” Egan said. “Our interactions with this vital, uncontrollable compound are perhaps the most important relationship we have.”

Southwest Floridians take heed for Egan is right. In the 16 southern Florida counties, 7.6 million people are living in a complex water system on which the entire state economy depends. This relationship needs to be handled delicately.

Meditation Four: Turning the tap is a moral decision, and it’s time for water conservation ethics. According to the South Florida Water Management District, 50% of our potable Florida water is used for landscape irrigation. Do we really need lawns? Visit floridayards.org for Florida-friendly yard ideas.   What are we throwing in that storm drain that’s going to wind up in the waterways? Think rain barrels, low-flow faucets and shower heads and water-efficient toilets.

Amends are in the works for past mistakes, but it isn’t enough to rely on the enormous and costly government restorations.

We are all personally involved. Water, after all, was humanity’s first home.

For more information regarding tours on the Estero River and Mound Key, visit www.collegeoflifefoundation.org.